Cal Thomas, the nationally syndicated columnist, in a 2014 article quoted heavily from a book written by British diplomat, Sir John Glubb (1897-1987), entitled, The Fate of Empires and Search for Survival. His research documented that the average age of empires since the time of the Assyrians (859-612B.C.) is 250 years. There has been only one exception and that was the Mamluk Empire, which ruled Egypt, Palestine, Israel, & Syria and stretched its existence to 267 years. America is now 242 years old.

Thomas goes on to reference Glubb’s research that empires go through common phases in their history.

The phases of empires are these:

Thomas comments, “America appears to have reached the age of decadence, which Glubb defines as marked by ‘Defensiveness, pessimism, materialism, frivolity, an influx of foreigners, the welfare state, and a weakening of religion.”

Quoting Glubb again, “Decadence is due to too long a period of wealth and power, selfishness, love of money, and the loss of a sense of duty.”

I can imagine a palling silence overtaking a room if this were being read in a public meeting. This should send a chill through the bones of any person who cares for this country. As we approach another election, hope still abounds that President Trump can “make America great again.” Thomas, a professed Christian, could only call for the “revival of the American spirit, and that can come only through changed attitudes toward our institutions and one another.”

And how does a nation wake up one morning with a “revived spirit”?

Martin Heidegger, the pessimistic existentialist, concluded humanity was decaying like a sinking ship, and the best we could do was play another game of cards as she went under. As foolish as that appears, given the encroaching dark clouds on our nation's horizon, it would appear the church has chosen to do business as usual (we don’t play cards).

The future of this nation is rooted in the hope that the Church will begin to cry out for God’s intervention.

We must cry out, as one does when faced with imminent danger and life-threatening circumstances.

As Leonard Ravenhill once said, “God does not answer prayer. He answers desperate prayer.” 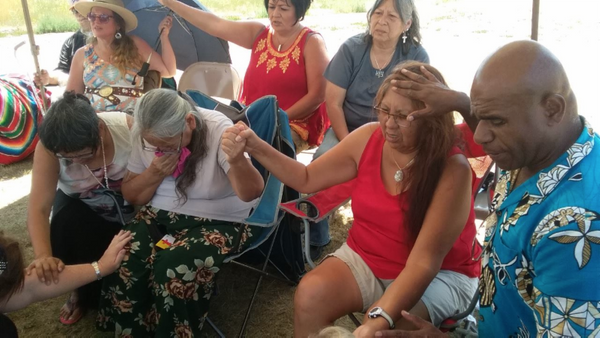 Donald Trump has been labeled a “disruptor.” Political scientists will tell you that over the course of American history, certain presidents have played this role. Among others were Ronald Reagan and Andrew Jackson.

The classic, In the Day of Thy Power, is a rich resource of revival wisdom and quotes. Arthur Wallis quotes William Reid, a Methodist pastor and hymnist (p.224). His words ring true