Cleveland remains sober, so thank you for praying for him. I am believing with you that he will become an abandoned follower of the Lord.

The funeral was a unique opportunity to preach the Gospel. Jackson, my colleague, reminded me I had actually led the man whose funeral I was asked to preach at to Christ about a year and a half ago. I was able to finally put two and two together. I don't know where the drinkers who died stood with God (it didn't look good from what I saw at their wakes), but with Tres I feel great assurance.

Here’s a bit of the backstory.

We drove Tres home one night. He sat quiet in the back of my truck, but I felt led to ask him about the condition of his soul. He confessed he didn't know, but wanted to know. After I shared the Gospel, he repented with tears, forgiving those who had sinned against him, and asking Jesus to be the Lord of His life. As we prayed, the presence of God filled the truck in a powerful way. We all sensed He was answering our prayer. Tres said he felt something had lifted off his shoulders.

Now, a year and a half later, Tres’ father asks me to preach at his funeral. Al Dreamer was originally going to use one of the prominent medicine men to facilitate the funeral, but said, "No, I want Wade to do it."

This in itself is a miracle. I preached twice, once at his wake and another at his gravesite. There were likely 150 people or so at his latter, and I believe Jackson and I were the only non natives. It was a unique door to preach to a traditional audience. I felt the unction of God, and talked about assurance of salvation through the blood and resurrection of Jesus, something that the traditional religion of the Lakota obviously does not and cannot offer… there is no assurance there. There was a good response, as several came up to talk to me after the ceremony.

Thank you for praying for the time with Broken Walls. There was a good turn out for their three events, and many were touched. I brought Ricky and his family. The kids were blessed and so excited.

I was humbled as lead singer Jonathan Maracle and church leader Willie Jock from the Mohawk tribe of upstate New York, honored me publicly by placing necklaces around my neck and calling me their brother. Then a man named Troy from the Chikahominy tribe did the same. Then I was given a picture of an eagle. It was almost overwhelming.

A few days ago my colleague Dave and I witnessed a Lakota man come under conviction when he saw his sin in light of God's holy standard. He then prayed publicly to give 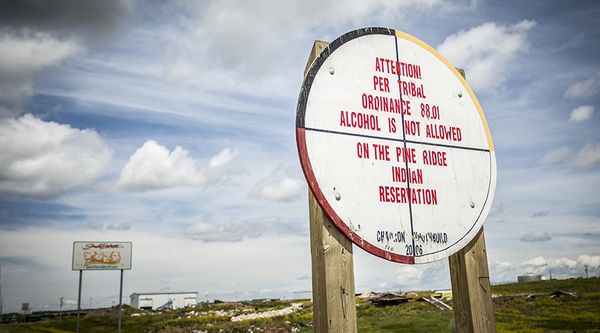 I ask that you lift up Cleveland in prayer. I met him a year and a half ago before he went to prison. He is now back here on Pine Ridge. A few